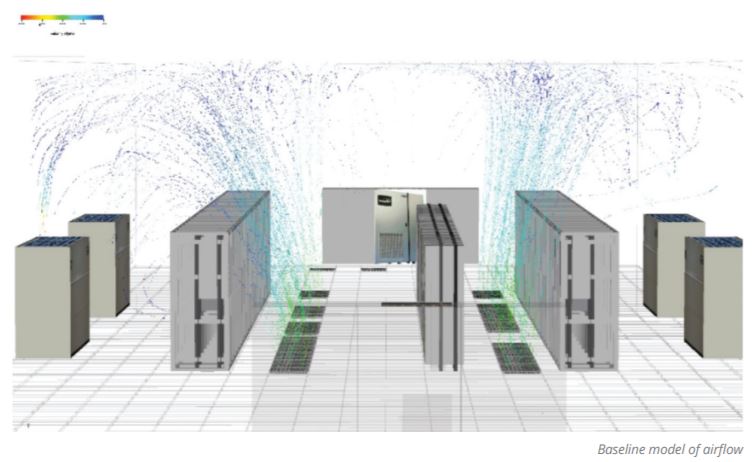 The reliability of a data center is an essential part of the business operation. As data center capacity and server rack densities have increased, in recent years, data center designers have made specific designs towards improving air circulation.

A sound air circulation system within a data center is a must in the continuous optimum performance of servers. It is in this respect that air circulation challenges are a significant variable to address. Keeping a consistent temperature for data centers is an ongoing commitment. In line with this, the advent of new technologies has made air circulation strategies more demanding than ever.

Continuous utilization of hardware consequently results in hot spots in the server rack. Some of the data center technologies that add to the cooling challenges are:

The concept of virtualization relies on the capacity of a single machine to support an interlinked virtual system. It involves loading the operating system of many virtual machines in one physical unit.

This process aims to lower maintenance costs. However, the overutilization of a standing operating system affects temperature conditions in the data center. The single unit will become hotter in the process. This is a cause of concern in streamlining air circulation in the data center.

Data capacity is not compromised in this kind of setup. It allows the same computing capacity through a smaller server medium. The downside of such a server setting is it amps up power densities. With smaller supply cables, power is compressed above 15 kilowatts per rack. Such compression thereby increases heat levels.

Cloud system is the name of the game nowadays. Cloud computing solutions are utilizing the same essential technologies but overriding each respective organization’s firewall. Such cloud solutions decrease overhead without compromising efficient output.

High temperature is mainly derived from poor air circulation. Such poor air distribution results in hotspots that are detrimental to the data center running condition. Some cooling issues that need priority solutions are:

Because air needs to pass through air coolers, air velocity is not constant. Higher air velocity levels can be accounted for near air coolers. This is called Venturi Effect.

This phenomenon is a result of high air velocity in the data center. With higher air velocity, local pressure is not maintained at constant. There are different pressure levels in the space generating what we call “hotspots.”

A lower pressure entails air to stay or be sucked back into space. With no air exchange, the air present is hot. True to its name, hotspots will result in higher temperature readings.

Fans are a staple in every data center. Built-in fans are present in IT equipment, especially servers. Fan power alone accounts for 7 to 9 percent of the total energy cost in a data center. Such energy levels are directly proportional to the amount of heat generated by fan motors.

Because fans are running continuously, the same percentage is required to cool them as well. Other than this, other factors such as pressure can produce air leakage.

Most of the cooling issues in data centers are the effect of poor design. Change in data center design is an alternative route to take for better air circulation. One of these approaches is low-speed ventilation.

Facilitating low-speed airflow is one example of alternative system design. Low-speed ventilation makes use of large coolers that will take the place of physical walls. As such, a low-speed airflow from the outside walls to air coolers eliminates any occurrence of local pressure differences.

This kind of air circulation strategy utilizes computer room air conditioning units (CRAC). This colling scheme places the CRAC units around the server perimeter. What it does is pump chilled air into the hardware.

The cold air from the AC units will help cool the equipment. Consequently, the entering cold air will drive the hot air exhaust towards the data center’s built-in air ducts. Despite this mechanism, chaos air distribution has its disadvantage. 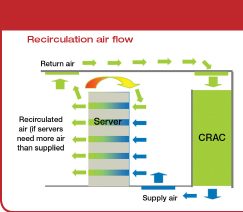 While cold air will drive away from the hot air in the racks, there is no guarantee that it is whisked away into the air ducts. A problematic issue results when hot air dissipates in other areas causing hot spots. This may potentially harm other IT equipment to a more alarming level.

There are different air densities in a space. When you look at tall buildings, the temperature is different on top floors than on the lower floors. This is where natural air density comes into play.

Once cool, denser air comes in the warm, thin air rises. This is an additional problem to hurdle, especially in achieving constant temperature reading in all data center parts.

In principle, you want the warm air to stream out when cold air is pumped into the server racks. This, however, is not always the case. This issue is stressful for a poorly designed data center with problematic air duct locations.

In most cases, warm air will not entirely flow out of the air ducts. There are instances where it returns to the air stream and joins the entering cold air. Such air dynamics will result in limited cooling turnout.

This kind of strategy focus on configuration design in a data center. It utilizes an aisle whereby server racks are oriented in a row. The air serves as a streaming medium to facilitate the exhaust of hot air and intake the cold air in return. This produces convection currents which in turn generate a cooling effect.

While this arrangement allows for continuous airflow, it still does not securely improve cooling efficiency. Even with the row configuration, the air can still move freely all over the data center. 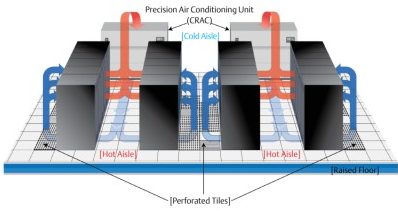 With the many variables to consider in operating a data center, sustaining consistent parameters is a significant endeavor. The most logical route to take in maintaining good air circulation is to maximize data center monitoring solutions.

Heat is a constant hurdle in data center operations. This is why it is essential to monitor the temperature regularly. AKCP provides wired, or wireless monitoring solutions fit for datacenter monitoring needs. Through the AKCP monitoring system, specific features in the data center can be monitored at granular visibility. AKCP sensors are effortless to install and highly secured whether it is monitoring temperature or airflow.

If you have a comprehensive monitoring objective, an end-to-end data center monitoring solution is the right choice.  The solution includes sensors and base units or wireless gateway and the ACKPro Server DCIM software.

Obstructions within the Cabinet 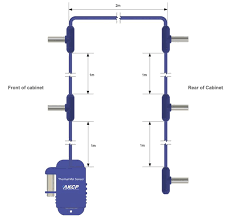 Cabling or other obstructions can impede the flow of air causing high-temperature differentials between the inlet and outlet temperatures. The cabinet analysis sensor with pressure differential can also help analyze airflow issues.

As fans age, or fail, the airflow over the IT equipment will lessen. This leads to higher temperature differentials between the front and rear.

Insufficient Pressure Differential to Pull Air through the Cabinet

Temperature monitoring alone isn’t enough to protect your data center. Larger areas often require additional sensor information to determine potential problems with cooling efficiency. Proper airflow management ensures that cool air is going to the server intakes and the hot air emanating from servers is properly exhausted. Airflow management helps to control static electricity and dust build-up on computer fans that can cause equipment crashes. The sooner you learn of a ventilation failure, the faster you can act to prevent reduced server performance, equipment damage, and complete shutdowns. Airflow sensors notify you of any drop in airflow, which can lead you to the cause of the problem, like a clogged filter, failing blower motor, or unbalanced fans.

The AKCP Air Velocity Sensor is designed for systems that generate heat, and a steady flow of air is necessary to dissipate this in order to maintain system reliability and safety.

The Air Velocity Transmitter sensor is placed in the path of the air stream, where the user can monitor the status and the amount of the flowing air. The sensorProbe or securityProbe web interface shows this information using a percentage and graphical display. In addition to an on/off indication, it also graphs the analog values over a period of time. If, for example, the airflow decreases the web interface will show an indication of change over time.

In addition to the web interface readings, the sensor has its own SNMP OID for alarm/normal status and to get the current analog value. SNMP traps are sent when critical. polling via SNMP get is also available.

There’s no end-all and be-all key in designing a data center. The best way to approach such design concerns is to collect as much information as possible. This information is key to building the core data center design.

Taking into account the environmental variables to negate air circulation issues activates a more optimum running probability. Deciding the cooling strategy is also one of the more vital initiatives to make a priority. Determining the best approach to data center design will prove to be essential in future efficient outputs.

To further optimize your data center, investing in intelligent monitoring solutions will make the organizational edge a certainty. 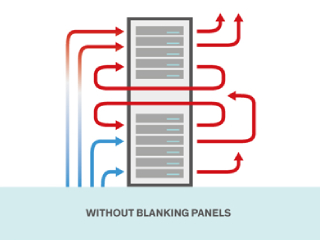 What are the advantages of blanking panels in the data center, and how do they assist in managing data center airflow. 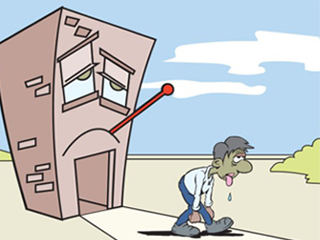 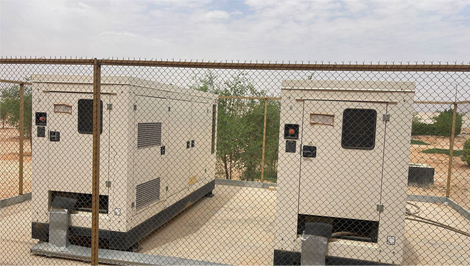