Denmark and Switzerland’s national meteorological services expanded their computing capabilities to supercomputers with heat exchangers built into the rack. This is known in the industry as Rear Door Heat Exchangers (RDHx). It can solve the problems related to high density, high compute power racks.

However, you don’t need a supercomputer to justify liquid cooling. Heat exchangers disperse heat in server cabinets and minimize the required cooling from computer room air handling (CRAH) systems. Technology advances are causing data center managers who dismissed them as risky to take a second look.

For any data center that utilizes 20 kW per hr or more per rack, RDHx cooling systems are employed for dense server settings. High-density data center cooling is a relative subject today.  Massive, power-hungry GPU clusters are required to train Machine Learning algorithms. They are also found in Bitcoin mining farms. This increases data center power density beyond the typical 3kW to 6kW per rack.

RDHx systems are proven at eliminating heat for intensive computing workloads. Thus, making them effective in cutting operational costs.
They have radiator-like doors attached to the back of racks with fins or plates. A network of pipes in the cooling fins brings in cool water and carries the heat away. This method of heat dissipation is efficient as it removes heat close to the source, resulting in a neutral room, without the need for hot or cold aisles.
Because they are so efficient, Lawrence Berkeley National Laboratory (LBNL) believes that data centers will not need CRAH anymore. Server output air temperatures reached 10°F (5.5°C) to 35°F (19.4°C) in an internal case study 10 years ago. Depending on the server workload, coolant temperature, and flow rate. In such a case, the waste heat was eliminated to the tune of 48 percent.
In the last decade, technology advanced tremendously. “RDHx can cut the energy needed for cooling by 80% at the racks and 50% in the data center overall,” Simmons claims.

Servers perform slower and consume more power when heat builds up within cabinets. However, adding RDHx to Fujitsu’s high-performance data centers solves the problem. This allows the servers to run at full capacity all the time.
RDHx systems can offer the extra cooling needed to overclock servers, boosting the processing speeds.

RDHx doors are used to cool servers using radiators mounted to the back of the racks. Doors are dependent on the servers’ fans to remove the heat. Active doors, which have built-in fans to draw heat through the servers, have become available in the last three years.
Chilled water was used to remove heat in early systems, as well as in many modern ones. To remove heat, some modern models utilize hot water (40°C). Others rely on coolants, such as R-410A, which is widely used. Even more efficient refrigerants are anticipated to be investigated in the next generation of RDHx systems.
The most effective form of heat transfer is liquid-to-liquid. 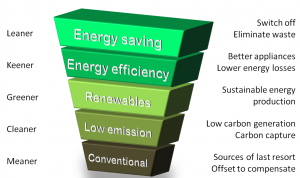 RDHx Is not for Everybody

For high-performance computer platforms, this cooling technique is the best. But giant firms like Google are not adopting this technology since they do not need dense infrastructures. In those cases, “good enough” computing is enough.

Colocation provider Cosentry sites other factors about their decision of not using RDHx in its facilities. RDHx systems, do not give the flexibility Cosentry need when laying out the data center floor. This is according to Jason Black, former VP of data center services and solutions engineering and currently VP and GM at TierPoint.

“A rear door heat exchanger often needs hard piping to each cabinet door. When colocation clients leave and we need to repurpose the space and this becomes a problem.” A flexible pipe, on the other hand, can help to simplify, but not solve, the piping problem.
Black is also concerned about bringing liquid into the data hall. For instance, the IBM heat exchanger door contains six gallons of water and allows for a flow rate of 8 to 10 gallons per minute. In the event of a catastrophic failure, a cabinet and the cabling beneath the elevated floor may be flooded.

LBNL, in contrast, piped chilled water for its RDHx cooling system underneath its raised floors using flexible tubing with quick disconnect fittings. Alternatively, overhead piping could have been used.

Cooling in the Future 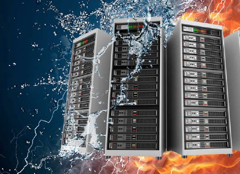 The industry develops newer, higher-tech cooling methods. And the feasibility of RDHx for normal computer operations is becoming less of a discussion topic. Server cooling may be handled at the chip level in the not-too-distant future. Liquid-cooled chips are being developed by manufacturers to disperse heat where it is generated. This allows for more compact board and server designs.

Quantum cooling is being investigated by university academics in the future. A team at the University of Texas at Arlington developed a computer chip that cools itself to -228°C without requiring coolant. Previous chips had to be immersed in coolant to achieve that feat.
Quantum wells, which are electron filters, are built into the chips to provide this extreme cooling. Only super-cooled electrons can travel through these wells, cooling the chip. Although the method is still in its early stages of development, it appears to cut chip energy consumption by tenfold.

LBNL recommends blanking panels in server racks to avoid hot air from damaging the components. It is also suggested that elevated floor tile patterns be evaluated to ensure that air is directed where it needs to be. And also for an increase in data center setpoint temperature. An energy monitoring and control system is necessary. This is to keep track of the system and make modifications to enhance performance.

When heat exchangers are employed in server cabinets, ensuring hot aisle/cold aisle containment is less necessary, though that configuration may still be beneficial. According to the LBNL advisory, “using an RDHx can substantially lower server outlet temperatures to the point that hot and cold aisles are no longer relevant.” However, in most cases, CRAH units remain in place and are supplemented with RDHx systems.

Monitoring the hot aisle or cold aisle containment is not necessary when using heat exchangers in server cabinets. though that configuration may still be beneficial. According to the LBNL advisory, “using an RDHx can lower server outlet temperatures to the point that hot and cold aisles are no longer relevant.” In most cases, CRAH units remain in place and are supplemented with RDHx systems.

Check for air gaps after installing RDHx cooling systems. RDHx doors do not always fit the racks as they should. Seal any gaps around cabinet doors with blanking panels to improve efficiency. It will also help to monitor rack temperature outflows before and after installing the heat exchangers. Keep an eye on the rate of flow through the system to make sure the RDHx is working to see whether liquid flow rates and server temperatures are related. To avoid condensation, make sure the coolant temperatures at each door are above the dew point and inspect the system for leaks on a regular basis. 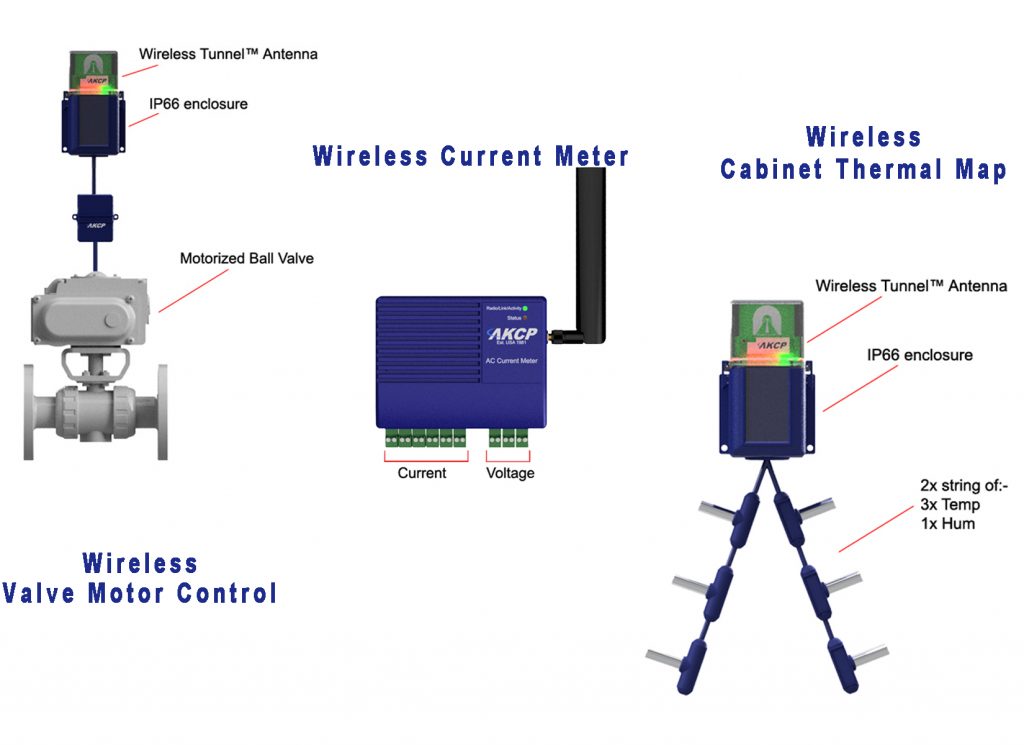 It’s necessary to have a mechanism for monitoring and controlling the overall flow rate provided to all of the heat exchangers. This can be a separate flowmeter incorporated into the flow loop or a flowmeter within the coolant distribution unit (CDU). To ensure that water specifications are being met and that the optimum heat removal is taking place, monitoring the temperature of the coolant is important.

Wireless, remote monitoring, and control of motorized ball valves in your water distribution network. Check status and remotely actuate the valves. Receive alerts when valves open and close, or automate the valve based on other sensor inputs, such as pressure gauges or flow meters. works with all Wireless Tunnel Gateways.

Wireless thermal mapping of your IT cabinets. With 3x Temperature sensors at the front and 3x at the rear, it monitors airflow intake and exhaust temperatures, as well as providing the temperature differential between the front and rear of the cabinet (ΔT) Wireless Thermal maps work with all Wireless Tunnel™ Gateways.

3x AC Voltage Inputs up to 487 VAC with 4x current transformer inputs, up to 50A max per phase. Monitor power with billable grade accuracy over Wireless Tunnel™ network with reports and alerts. Works with all Wireless Tunnel™ Gateways.

RDHx cooling can be a strategic piece of data center hardware. It’s an expensive solution to a minor problem but it depends on the data center if it’s going to be worth it or not. Before considering RDHx, think about current and future needs and know what you’re trying to achieve. That will determine whether RDHx cooling is right for your organization now, or in the future. 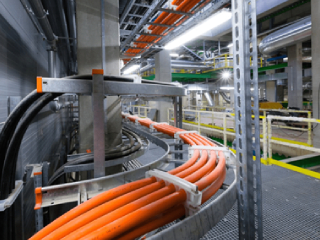 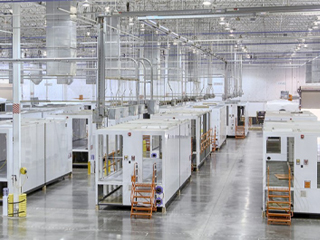